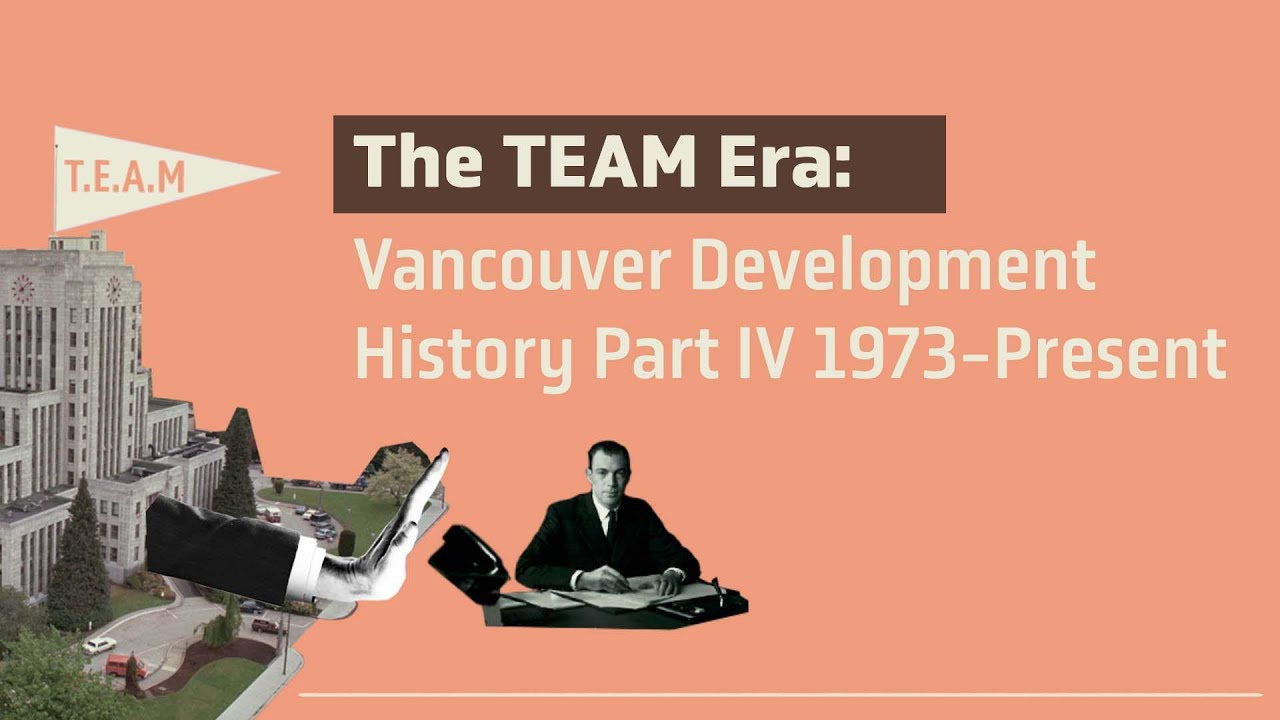 TEAM (The Electors Action Movement) was a political organization that won Vancouver City government in 1973. Just prior to the vote, the new NPA Mayoral candidate was caught up in a scandal causing the NPA vote to implode. Although the TEAM vote remained less than was historically required it was enough to elect a Mayor and 8 Councillors.

From 1952 to 1973, the most respected voice in City Hall was Gerald Sutton Brown, born and raised in Jamaica, responsible for Britain’s second largest city through World War II, he brought a British Commonwealth approach that was very different from US cities. His West End, Vancouver Special and high density residential on the industrial waterfront with public walkway does not have equivalents in the US. He ensured city development responded quickly to market forces so the price of housing remained affordable.

TEAM candidates were among the academic and managerial elite of the city and they brought about such a sea change in Vancouver history that we can consider we are still in the TEAM Era. Their first acts were to fire Sutton Brown and downzone the West End and they introduced processes to ensure there would be no more loss of single detached house neighbourhoods. They brought this approach to Metro Vancouver and rejected numerous reports from economists and the real estate industry warning this would lead to rising house prices and other dysfunctions. Today there are less people living in most residential neighbourhoods than in 1973, even while many of the smaller old houses were demolished and replaced with much larger ones.

TEAM brought new direction to Vancouver by supporting a federal Just Society LIP Grant for people living in low income SRO hotels around the downtown. The city helped incorporate a nonprofit political advocacy group called the Downtown Eastside Residents Association (DERA). This is the first time the Vancouver public heard the words Downtown Eastside. This area had been economically and socially healthy in the past and was experiencing revitalization. Instead government intervened in these natural processes and the area became the focus of government free housing and services. This countered Sutton Brown’s efforts to create healthy mixed communities in every area of the city. The Downtown Eastside is unique in Canada as other cities did not intervene as in Vancouver.

This video attempts to correct the mythology that has grown around TEAM and Gerald Sutton Brown over the last decades. Sutton Brown was a quintessential British civil servant who never defended himself against reputational attacks. One of the most enduring myths is that TEAM stopped the downtown freeway. In fact, TEAM proposed in May 1969 a freeway running through Downtown South and Yaletown and opposed the alternative of connecting the proposed freeway with the third crossing by a tunnel under Chinatown. Stopping a freeway was not in the TEAM 1970 or 1972 election platforms. There were many freeway proposals to take commuters off the residential streets of East Vancouver but the only serious one went through industrial lands and the Grandview Cut ending at the Georgia Viaduct.

Gerald Sutton Brown championed the conversion of industrial waterfront to high density residential with a public seawall walkway. He began this by opposing a pulp mill proposal which instead became the Bayshore Inn. He negotiated a seawall right-of-way along Coal Harbour to Stanley Park and began purchasing seaside land along Beach Avenue. His plans for False Creek show a waterfront walkway around the whole area. He was fired before his projects were built.

This is the fourth video in a series of four on the development history of Vancouver.

Here are the previous videos in the series:

Special thanks to Dave Davies for his excellent research!

Global Civic supports civic leadership in nonprofits, business or local government. It encourages a respect for British Columbia and its history. More info here: Kumtuks is a video blog that shares knowledge and explores new narratives. Some quotes and descriptors have been adjusted for clarity and brevity. Please subscribe if you would like to be notified of new videos. If you would like to receive commentary and invitations and support more videos https://www.patreon.com/kumtuks.