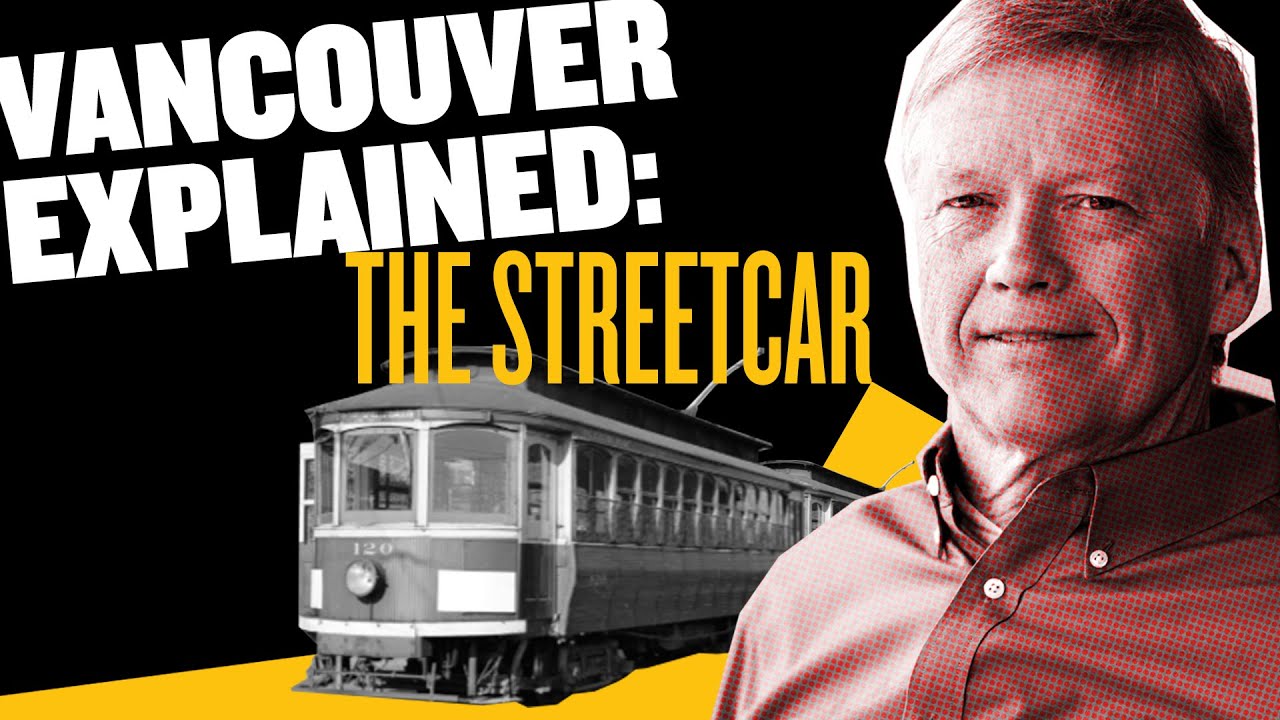 In its first 40 years, Vancouver developed with surprisingly little government involvement. The Canadian Pacific Railway laid out and named its streets in a flexible grid pattern before the city government even existed. The streetcar company determined which streets would be major.

One of the great shapers of Metro Vancouver was Robert Horne-Payne, President of the BC Electric Streetcar Company, which he incorporated on Threadneedle Street in London. London was the inspiration, an unplanned city whose order arose incrementally from human actions not human design.

From his home and wheelchair in Brentwood, England he personally made all major streetcar decisions, harnessing market forces to build the transportation and hydroelectric infrastructure of the region.

The Marchetti Constant says a city area is limited by an average one half hour commute. Even great ancient cities only had a 2.5 kilometer walkable radius. Streetcars tripled this to 7.5 km. The increase in area became the streetcar suburb, requiring a new form of housing.

In Europe, the worst living was the ground floor, the best the next floor up, the piano nobile, called the first floor in Britain and some Vancouver buildings. With no elevators, the cheapest floor was the highest, the opposite of today. Growing grass or gardens, not food, gave status.

The single detached house elevated with stairs was perfect for the 1890s. Almost all Vancouver houses were built ‘on spec’, that is by speculators. Horne Payne offered discounted transit to populate the new neighbourhoods.

A healthy streetcar line needs a catchment area on both sides for maximum riders. A line beside water or park or close to another line will have reduced ridership. Major streets were set just under one kilometer apart.

Homeowners on successful streetcar lines built stores on their front yards. All our neighbourhood shopping streets started this way. Some of the original houses can still be seen today. With zoning, conversions like this became illegal.

Streetcar extensions that developed after zoning have few stores. Main Street has retail up to 33rd Avenue, the original streetcar stop.

On Fraser retail follows the original line to 51st Avenue. On Victoria north of Kingsway, no streetcar – no retail. South of Kingsway the shopping street ends at the old stop on 43 Avenue. Streets like Knight, Cambie and MacDonald got transit after zoning and have almost no retail at all.

Retail prefers flat land; Davie and Robson have few stores on their hill. Commercial Drive had ample housing, thus healthy retail. But Venables went through a swampy area; it became industrial. The original geography of Vancouver can be discerned; park, school and industrial sites were often marshy areas not suitable for housing.

BC Electric powered homes and industries. Horne-Payne switched from coal to hydroelectric by linking Coquitlam Lake to Buntzen Lake, named after a company manager, then power stations on Indian Arm. He linked Allouette Lake to Stave Lake power and diverted the Bridge River for Seton Lake power.

Horne-Payne built a factory in New Westminster that produced hundreds of streetcars.

BC Electric’s focus on technology and experts influenced culture. Its corporate headquarters was BCs first modernist high-rise, now a condominium.

Studies show BC Electric invested more and took less than most other city systems. Voters refused to purchase BC Electric, believing government ownership would mean increased taxes. Indeed, after the Province nationalized BC Electric in 1961 taxpayers have subsidized transit ever since.

Horne-Payne faced a boom and bust economy; the value of Vancouver building permits peaked in 1913 and 1929 at $20 million plunging to $2 million shortly after.

The gas-powered automobile expanded the city radius to twenty kilometers. One landowner built the Lions Gate Bridge so car driving homebuyers could reach his properties. BC Electric shifted to gas buses although even today electric trolley buses largely follow the original streetcar lines.

Vancouver’s expansion began with the Powell Line, to the original High Street, Cordova, then Granville and Pender.

Over the Granville Bridge, on Broadway seven trestles over streams, eventually the looping Fairview Beltway.

In New Westminster, Columbia climbing to Queens Park to sixth and sixth.

Hastings’ role strengthened. The Robson line opened the West End. The Stanley Park line by the all-important post office, down Pender and Georgia.

The planned Bidwell line was changed to Denman, then up Davie.

Main and Powell were extended. BC Electric acquired the Kitsilano Trestle and a line serving industry on False Creek. Main Street to 33rd to the Mountain View Cemetery and the rock quarries, making possible the Queen Elizabeth gardens.

A ferry bringing passengers to the North Shore was at the Inner Harbour’s widest, slowest moving point. Four times a day this large body of water rushed through the treacherous First Narrows at often ten times the speed.

Horne-Payne had wanted a rational line on Third Street, but the region’s first public consultation process forced a substandard route.

The main line up Lonsdale, another to Lynn Valley. Horne-Payne purchased the forest up to the Capilano Suspension Bridge and gifted it as the park we enjoy today.

The Sockeye Express climbed around the Quilchena Park Plain, source of some of the world’s largest timber, to a place it called Kerrisdale, downtown Point Grey, with a City Hall, and now residential towers. This line to Steveston led fishing and farming to flourish.

Georgia and Keefer, Broadway to Fraser, Robson to Recreation Park.

A freight line to a brickyard led to the flatter Marpole line for heavy goods from New Westminster on to Vancouver.

Powell, the original line to East Vancouver, to the PNE entrance. Hastings gained prominence with a line to Boundary Road.

A line went up Kingsway then Fraser to 51st, then Victoria to 43rd. Cordova linked to Granville

A bridge enabled the Fraser Valley line, opening up new communities. Lumber mills and farms flourished and BC Electric brought thousands of gallons of milk to Vancouver every day. It avoided the massive but shallow Sumas Lake. The province built the Vedder Canal and drained the Lake. Chilliwack incorporated, anticipating the arrival.

Broadway only went to Trafalgar, the end of CPR property.

Main extended to 50th then 63rd, Richards and Cambie to Hastings.

The Burnaby Lake line is now the Trans Canada freeway. Its boulevard on First Avenue veered off at Nanaimo to join Commercial Drive. First Avenue was never meant to be an arterial, and still looks residential.

Powell to Venables on Commercial, Kingsway to Joyce, Broadway to Commercial, Granville to King Edward.

Main to the Marpole line, Fraser to 59th, 4th up Alma to 10th to Sasamat to 4th later to Drummond, 41st to Dunbar,

To Fraser Mills the largest in Canada. A connector on Sixth Street. A bridge over the Fraser to Queensborough. The Highland cutoff which is still used by the Expo line today.

Granville to Oak on 33rd, Oak to Broadway, then Oak to Main on 16th, Connaught/Cambie Bridge linked to Robson, Richards to Drake, Nanaimo to Broadway.

The east half of False Creek was filled from the Grandview Cut.

Crown bypass 16th to Dunbar, 41st from Boulevard to Main, Oak Street to Marpole, Victoria to 54, Kingsway to Earles, Hastings to Ellesmere, Fraser connected to Marine Drive, the Powell line linked to Hastings.

The PNE entrance moved, though it still feels like the back door.

Broadway to Alma then the Dunbar bypass led Crown to close.

Horne-Payne cancelled the streetcar to Rupert Street and instituted Metro Vancouver’s first bus line, signalling the beginning of the end for streetcars.

BC Electric had expanded its network conservatively. Many streetcar companies had gone broke and there was no government to bail them out. Horne-Payne rarely approved extensions unless there were contributions by landowners and there was development already in the area.

He refused to get involved in land speculation or property development, focussing solely on the core business. Because decisions were made in London, there was a buffer from public and political pressure. Metro Vancouver was more compact because of BC Electric.

Robert Horne-Payne sold BC Electric and passed away, leaving a region that had grown organically through market forces with little government involvement. He had built the transportation and energy skeleton of Metro Vancouver.

Special thanks to Henry Ewert for his advice on this video.