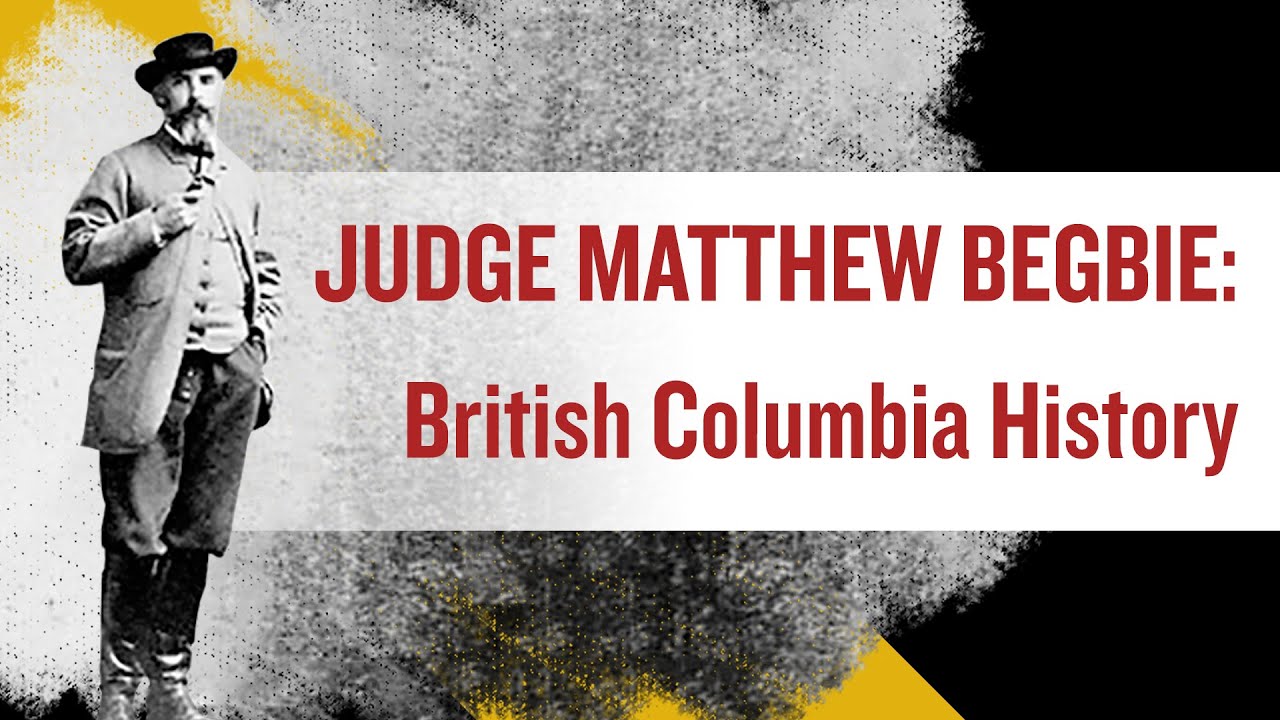 British Columbia was formed when 30,000 men from California arrived in pursuit of gold. They outnumbered British subjects more than 10 to 1 and some wanted this to be US Territory. Within 10 years, the United States would control Alaska and ask Britain to give up BC.

Britain responded by declaring British Columbia a Colony, sending its navy, hundreds of Royal Engineers and Matthew Begbie, a capable lawyer from London. He became the top Judge, a position he would hold for 36 years.

He traversed the gold fields enforcing British law. US miners protested when Begbie convicted one of assaulting a native person with only aboriginal witnesses. Testimony by native people was not admissible in California courts. He overturned the conviction of a man who had pleaded guilty to holding a potlatch, saying the law was unfair. Begbie encouraged juries to be lenient to aboriginal defendants, wrote of their “natural intelligence, honesty and good manners” and allowed oaths to be sworn on sacred objects. He defended First Nations homes and grazing lands, preserved Fraser River fishing rights and ensured women could inherit from non native common law husbands.

Begbie learned Shuswap and Chilcotin and spoke Chinook Wawa, the aboriginal trade language, writing it in the margins of his Bench Books.

Begbie threw out legislation targeting Chinese, describing them as “better British Columbians” than many of their critics, who he accused of “racial jealousy”. He instructed the City of Victoria to grant a withheld business license. Increases to the Chinese Head Tax succeeded only after Begbie died.

Begbie’s court travelled thousands of kilometres every year, by foot, horse or canoe, to communities around the province. They slept on the ground in wet tents and often ate only what Begbie could hunt.

His title “Hanging Judge” has puzzled historians as he was never called this during his lifetime. Given the harsh laws, his tenure averaged well under one hanging per year. He rejected a military career saying it was “abhorrent to take human life”. He said, “I have never hanged a man”. His duty was to declare the sentence based on the findings of the jury. Murder meant automatic death penalty. He could appeal to Governor Douglas, but he did so only for aboriginal and Chinese defendants, 11 successfully.

Begbie was famous for his theatrical statements meant to convince hostile US miners to accept British Columbia law. When a jury found a murderer guilty only of manslaughter he scolded them saying all of them should have been hanged, though he told the Governor he was privately satisfied. These kinds of statements led the Barkerville Gazette to call Begbie the “Haranguing Judge”. The source of the name?

Begbie’s legacy was tarnished because he presided over a court in which five Chilcotin Chiefs were hanged.

Begbie’s legacy was tarnished because he presided over a court in which five Chilcotin people were hanged, two of them Chiefs.

Shortly after Governor James Douglas was removed from power, 19 people were killed. Most on a road building crew in Chilcotin Territory.

Chilcotin Chief Klatssasin, near Bute Inlet, was responsible. Chief Alexis and Chief Anahim of larger Chilcotin groups, did not support the violence and helped the men sent to make the arrests. Alexis Creek and Anahim Lake are named after them. Two Coast Salish men also helped as their people had been massacred much earlier by the same group.

The First Nation leaders believed they were going to discuss peace, that this was war not murder, but they were arrested. Settlers were highly emotional given the workers were ambushed with bodies mutilated and thrown in the river. The jury declared them guilty, meaning automatic death sentence.

Begbie wrote to Governor Seymour that it was “horrible to hang five men at once, especially under the circumstances of the capitulation.” He added he was relieved it was not his decision.

Before the rule of law, inter tribal conflict could be brutal. Chilcotins ambushed a village of the Dakhel or Carrier people, killed all, and hung the bodies of the children on two fish smoking poles. Three years later, the Dakhel responded in kind. In 1826, a Chilcotin attack on another Dakhel community was repelled with many casualties only after the Hudson Bay Company provided guns. This worsened relations.

After Begbie, lawyers and judges rejected his legacy and for generations participated in a society wide discrimination against minorities and indigenous people.

In 2017, the Law Society of BC removed a statue of Judge Begbie in a well-intentioned gesture for reconciliation. The decision was made in secret.

British Columbia enjoys a law-abiding, multicultural society with a quality of life the envy of the world. Judge Begbie worked in conditions that would shock his modern critics. While just south of the border, the US Army waged a dozen wars against indigenous people, Judge Begbie risked his life in hostile environments for a more just society.

With a legal system that owes so much to him, in a province whose very existence depended on the force of his personality, one must wonder if the justice he worked so hard for was done.

about the removal of statues and names? You can sign the petition to ask that all such decisions be taken only after a formal process in which all information is considered:
Please sign our petition to respect Judge Begbie! You can also support the creation of more Kumtuks videos and get additional information that had to be edited out by supporting our Patreon account