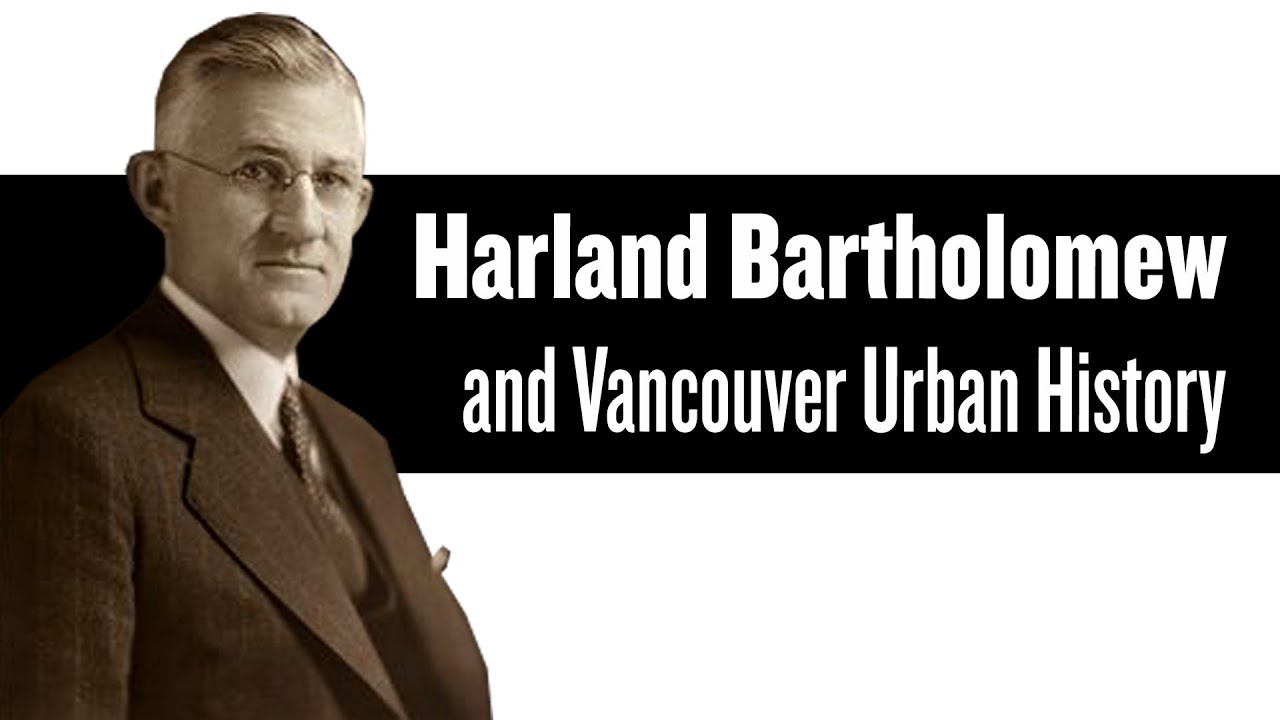 For 40 years, Vancouver developed without government planning. The Canadian Pacific Railway laid out Vancouver’s streets before the city government existed. The London-based BC Electric Company chose the arterial streets to maximize riders on its streetcars. London was the model, where order came from human interaction not human design.

Robert Horne-Payne, founder of BC Electric Company sold it in 1928 then died shortly after. That same year, Harland Bartholomew presented his radical Plan for Vancouver, claiming cities are better designed and organized by planners than by natural processes.

He had been the first full-time planner in the US, advising on freeways and slums. Mayor LD Taylor, originally of Chicago, endorsed him though many had wanted someone from the Commonwealth who understood British cities and institutions.

The British Discretionary System is principle based; it starts with what cannot be built, everything else is possible. The United States Regulatory System is rule based; it starts with what can be built, everything else is not possible. The US system was top down originating in Bismarck’s Germany. The British system was bottom up, incremental, organic.

British philosophers like Alan Turing, an inventor of the computer, were Emergentists. He described how complex structures assemble themselves without a designer.

Jane Jacobs was influenced by the British Emergentists and wrote “no logic can be superimposed on cities. People make it”.

Designed cities do not have this gradient, for example a Soviet city like Moscow or the completely planned Brasilia.

Bartholomew installed planning regimes in hundreds of midsize US cities. He had just finished his work with Peoria Illinois when he moved his operation to Vancouver.

Bartholomew’s Plan and over a dozen supplementary reports to Council documented the already efficient, organic Vancouver with many statistics and thoughtful commentaries. He wrote, “its history is like Topsy. It just growed”.

His own ‘scientific’ contributions were less persuasive like to move all public buildings to one Civic Center, reduce False Creek to a 200 meter wide shipping channel, build up to thirteen airports, line the banks of the Fraser River with industry, drive diagonals through neighbourhoods to link streets and dam the Second Narrows for a freshwater harbour. His decision to zone the healthy Strathcona neighbourhood as industrial would lead to its deterioration.

His decision to zone the residential Strathcona neighbourhood as industrial meant it would maintain a healthy mix of uses for decades.

Bartholomew’s Plan includes common sense suggestions to expedite car traffic and provide civic services but his major focus was on his Distributor Connecter, a ten lane highway through the middle of downtown, Robson over a new False Creek bridge connecting to Kingsway with spurs to Burrard and Pender – a freeway before the word was coined.

Vancouver neighbourhood streets typically have sixty six foot rights of way with 24 to 30 feet actual road. Bartholomew wanted a dozen streets doubled in width to eight or ten lanes and a six block elevated road between Burrard and Arbutus. His Plan mandated a landscaped Pleasure Drive up to 200 feet wide for cars around almost the entire waterfront, beach parking for 1000 cars and five additional drives crisscrossing the city.

which he rarely did in other plans. He did this at the insistence of the elected Park Board.

The introduction to his Plan emphasizes “the absence of skyscrapers” and Vancouver as a “city of single family homes”. The model for Vancouver shifted symbolically from London to Peoria. Vancouver would swing between the UK and the US models ever since.

Bartholomew set up Planning Commissions but he wanted them called Plan Commissions. Cities should adhere to his plan not spend time tinkering with it and only periodically make changes. Vancouver’s Town Planning Commission was the main planning body from the 1920s to the 1950s. It tried to preserve the West End near Stanley Park for large single houses only. Bartholomew wanted participation in the planning process and created advisory committees of up to 100 people.

The three person Zoning Board of Appeal challenged the US model. In the first 18 months Vancouverites launched 250 appeals. Bartholomew said “the unregulated subdivision of land has been a vast blunder” and criticized the board, recommending its powers be reduced and that it have five members. In time, these were implemented; the name was changed to the Board of Variance.

The US Regulatory Model envisioned giving land use power to Planning Commissions and making it difficult for City Councils to deviate from their Plan. Vancouver rejected this and maintained British political culture; it refused to adopt a Plan and never integrated the Commission into the city structure.

In early Vancouver, Alexander Street was preferred by the wealthiest. But with growth they moved to the West End and built numerous mansions. Growth pressures followed and they decamped to a new neighbourhood, Shaughnessy. Today only one of those original mansions remains.

But Shaughnessy sought protection from the free market with one of the worlds’ earliest zoning laws, an Act of the BC legislature, that kept out uses other than single houses.

In the US, he claimed that zoning could prevent movement into “finer residential districts by coloured people”.

Zoning froze the previously fluid boundaries right where they were in the 1920s; they have barely moved in the hundred years since.

Almost all Vancouver houses had been built by speculators, or ‘on spec’. What the market wanted in the early 1900s, planners would mandate as the only allowable form for over 100 years.

Detached Residential that excluded most uses, Apartments with some uses the detached zone didn’t want, and the Unrestricted Zone with everything else. He described it as temporary “largely to prevent intrusion of apartment houses” into residential areas.

The full Bylaw had 10 districts. Anything less than a forty foot house lot was considered too small and needed an Approving Officer. The General Business District allowed one third of a site to have a maximum 18 storeys. The 22 storey Marine Building slipped in the year before.

The full Bylaw had 10 districts. Anything less than a forty foot house lot was considered too small and needed an Approving Officer. Bartholomew had wanted downtown commercial buildings limited to 10 storeys but the Vancouver Charter already allowed 18. He reluctantly accepted but further restricted the extra height.

Before zoning, homeowners on streetcar lines built stores on their front yards

creating the shopping streets that define our neighbourhoods. Some of the original houses can still be seen.

Bartholomew stopped corner stores and cafés within residential areas which he claimed “caused considerable damage”. If they ceased operating for just one month the City would close them permanently. After 100 years only a handful of these much loved businesses still remain.

Workshops, print shops and laundries were no longer allowed. Restaurants were allowed but not if they had music and dancing.

Vancouver’s once vital neighbourhoods under the London model became deserts of US style suburban monotony. Urbanists call this effect, “the dead hand of planning”.

Before zoning, if a homeowner thought more housing was needed they would simply build an apartment. This quick response ensured the price of housing remained affordable.

Bartholomew ended this and limited apartment buildings to six storeys; the taller Sylvia had been built before zoning.

Bartholomew noted when he arrived that Vancouver had low car ownership. But the new neighbourhoods no longer had shopping and services close by and the old neighbourhoods had lost variety. Residents now needed cars to meet their needs; with the additional driving, minimum parking standards were imposed throughout the city.

Bartholomew railed against stores that went right to the property line

Setbacks, parking and open space requirements combined to give us the strip mall.

Vancouver had embraced zoning more enthusiastically than planning. In his last report, Bartholomew reminded Council he had asked them to impose a 2/3 vote to deviate from his Plan. He lamented that in 22 years no Councillor had even attempted to approve the Plan.

Perhaps because the year after, the world entered a 10 year depression making his plan obsolete. Even Shaughnessy, which had started zoning, was called ‘Poverty Hill’ as mansions were confiscated for taxes and owners illegally converted them to rooming houses to try to cover their mortgages.

Eventually 30% of all Shaughnessy homes became rooming houses. But zoning justified removing this affordable housing once the economy recovered.

when the City Council refused to reimburse him for his travel.

Vancouver turned to someone from the British Commonwealth for its next phase of development. Gerald Sutton Brown, our first Chief Planner, born and raised in Jamaica, worked in northern England would bring back elements of the British discretionary model more sensitive to natural processes and market forces.